As seen in Figure 1, the U.S. labor force participation rate for persons with disabilities had been declining until 2014 and then had a moderate increasing trend until COVID began. When the COVID pandemic began in early 2020, the rate fluctuated and then fell in January 2021, hitting a low of 19.6%. From January to November 2021, the rate spiked to 23.2% and has remained steady at 22% to 23% since.

Along with the high labor force participation rate for persons with disabilities, the population with disabilities has been on a steady rise since late 2010. It slightly declined at the start of the pandemic but then started to rise again. 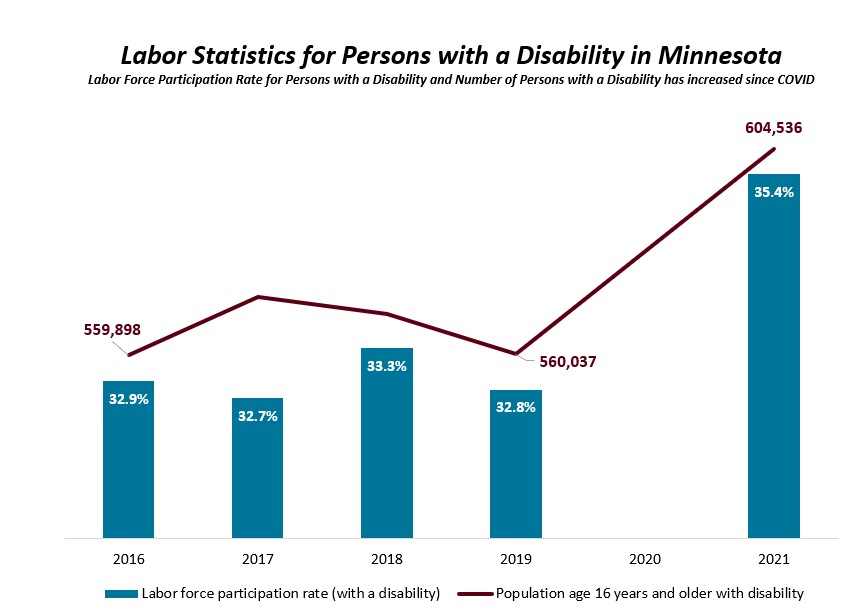 In Minnesota, the labor force participation rate for persons with disabilities also increased following the pandemic, as did the number of persons with a disabilities. These two measures are both shown in Figure 2, above.

But on the other hand, COVID has been deemed a “mass disabling event.” According to the Bureau of Labor Statistics, from 2020 to 2021, the number of people in the civilian non-institutional population with disabilities has increased for all age groups, and the civilian labor force for all age groups besides 65-and-over stayed relatively the same. The age group of 65-and-older is likely left out due to the trend of people taking early retirement because of COVID.

One of the contributors to the increase in the number of persons with disabilities is that long COVID can be considered a disability if it meets the ADA requirements of substantially limiting one or more major life activities. Not all long COVID cases meet the requirements, but it is definitely a possibility for someone with long COVID to have a serious enough case to meet the ADA standards.

It is hard to tell for sure if someone with long COVID is considered to have a disability under the ADA since this is decided on a case-by-case basis. In more serious cases, people with long COVID can experience damage to the lungs, heart, kidney, circulatory system, and neurological activity, or they can experience mental illness. All of these symptoms could qualify as disabilities under the ADA. However, the most common symptoms of long COVID are fatigue, shortness of breath, and difficulty concentrating, known as brain fog. These common symptoms, if persistent and severe enough, could be considered disabilities. 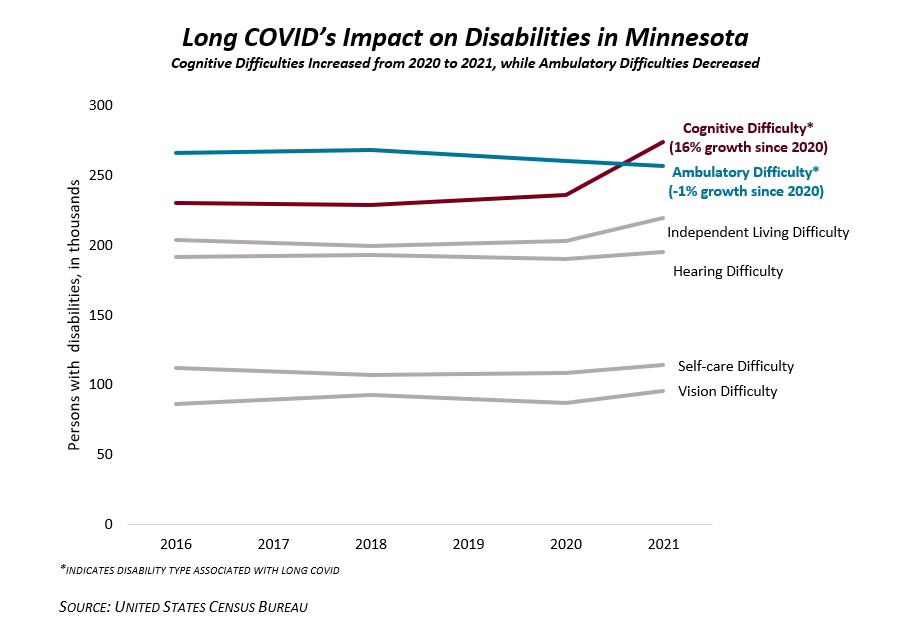 Figure 3 shows the number of persons in Minnesota with disabilities, sorted by type. Ambulatory difficulty and cognitive difficulty—the two disabilities most likely to be associated with long COVID—are shown in blue and red, respectively. The remaining disabilities are shown in gray. The figure shows the most recent estimates available from the U.S. Census Bureau (2021), as well as estimates from 2016, 2018, and 2020.

We can look at the changes in the amount of people with cognitive difficulty and ambulatory difficulty to see the impact of long COVID on disability statistics. The types of disabilities not associated with long COVID have all stayed relatively constant or have seen slight increases. Ambulatory difficulty has seen a decrease since the pandemic began, signaling that long COVID might not be contributing to the participation rate as much as remote work. It appears to be just slightly off trend. However, cognitive difficulty has seen a large increase since the start of the pandemic. Despite the slight decrease in ambulatory difficulty, this large increase could suggest that part of the increase in the labor force participation rate of persons with disabilities can be attributed to long COVID’s classification as a disability.