Mark Wahlberg has revealed his new, ‘dialed-down’ daily regime that involves sleeping in — until just 3.30am.

The A-lister — who made headlines in 2018 when he revealed his militant diet and exercise program — is no longer eating oats, peanut butter, blueberries and eggs for breakfast instead fasting for 18 hours a day.

After waking up from ‘3.30am to 4am’, the 51-year-old flushes down a slew of supplements and vitamins including turmeric and vitamins C and D.

He has only recently started drinking espressos which he uses to suppress his appetite during the long fasts, which usually last from 6pm until 12pm the following day.

By Marky Mark’s standards, this is actually a step down from his former fitness regime that saw him get up at 2.30am and plough through up to eight meals a day.

But the Transformers actor — worth an estimated $400million — says the new version is giving him ‘better results’ without having to do as much cardio or spend as long in the gym.

He moved to Las Vegas this year with his wife Rhea Durham and their four children Ella, 19, Michael, 16, Brendan, 14, and Grace, 12, with the aim of giving his family the best lifestyle. They had previously lived in Los Angeles. 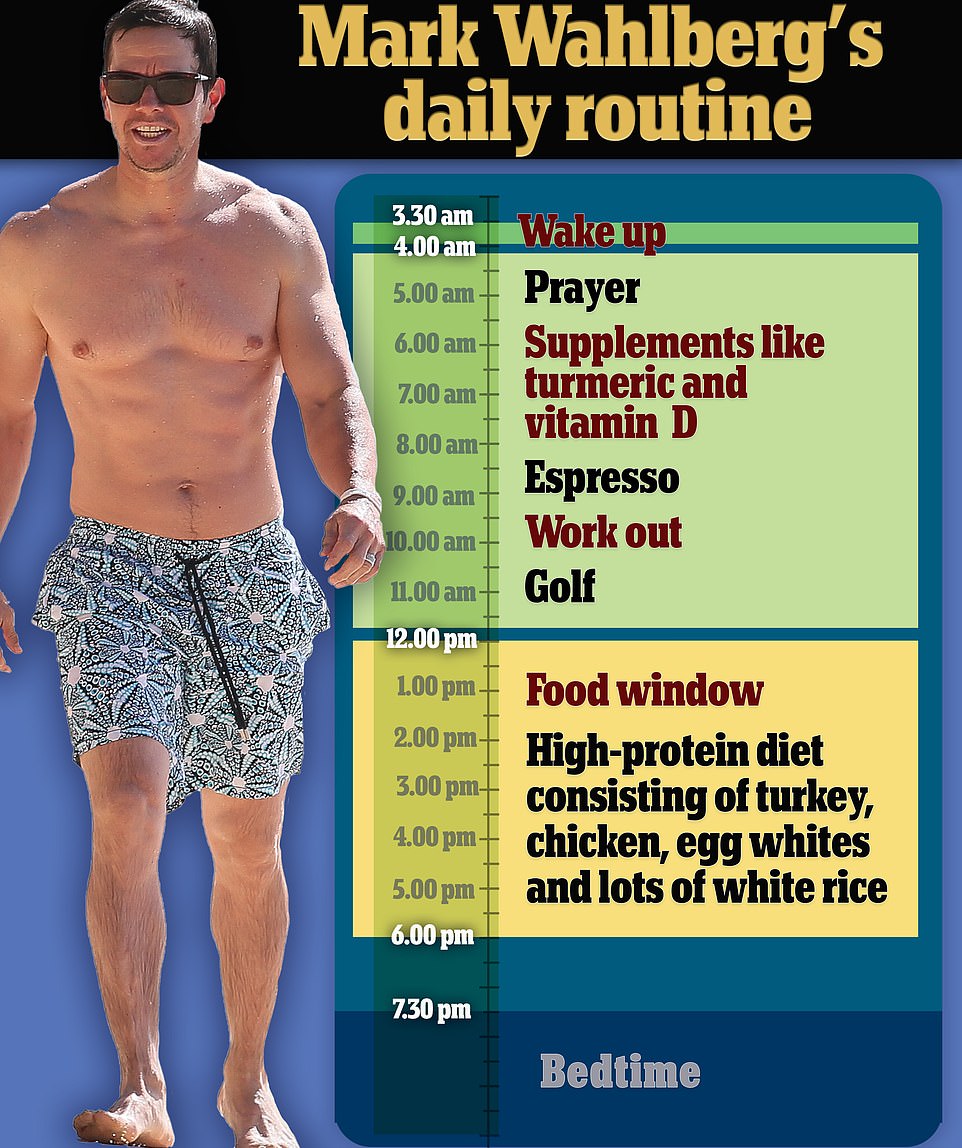 Pictured above is Mark Wahlberg’s daily routine, which he says keeps him productive and in better shape than ever before. The Academy Award-winner — worth an estimated $400million — said: ‘I don’t have to do as much cardio, I don’t have to spend as much time in the gym and I feel like I am getting better results.’ 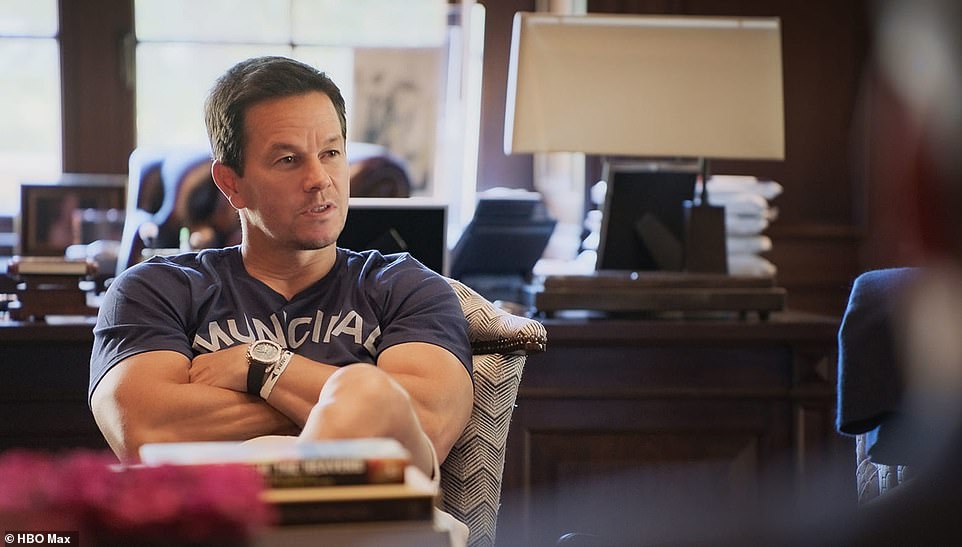 The Transformers actor sparked shock when he revealed his workout plan in 2018 that had him getting up at 2.30am a day. In the new ‘toned-down’ version, he gets up between 3.30 and 4am. The actor is pictured above on Wahl Street, a series that follows him as he tries to run his businesses

What is intermittent fasting?

Intermittent fasting involves switching between days of fasting and days of eating normally.

The 16:8 diet is a form of intermittent fasting, also known as Time Restricted Eating.

Followers of the eating plan fast for 16 hours a day, and eat whatever they want in the remaining eight hours – typically between 10am and 6pm.

This may be more tolerable than the well-known 5:2 diet – where followers restrict their calories to 500–to-600 a day for two days a week and then eat as normal for the remaining five days.

Many prefer to eat between noon and 8pm as this means they only need to fast overnight and skip breakfast, but can still eat lunch and dinner, along with a few snacks.

When you do eat, it is best to opt for healthy options like fruits, vegetables and whole grains.

And drink water and unsweetened beverages.

Drawbacks of the fasting plan may be that people overindulge in the hours they can eat, leading to weight gain.

It can also result in digestive problems over the long-term, as well as hunger, fatigue and weakness.

In an interview with the Wall Street Journal about his productivity, the Transformers star said he gets the most done when being ‘consistent with my routine’.

‘Getting the right amount of rest, really staying focused. My spirituality, my faith has got to be the center of it all.’

On the new plan, he added: ‘I don’t have to do as much cardio, I don’t have to spend as much time in the gym and I feel like I am getting better results.’

The Academy Award-winner’s day begins around 3.30am to 4am, before he takes supplements has an espresso and heads to the gym.

He works out for about an hour and a half, varying exercises depending on upcoming roles. Generally, however, the regime focuses on weight training.

He goes to the golf course as well before his window for eating begins at midday and finishes at 6pm.

On days where he’s trained harder in the gym, The Gambler actor constricts the eating window by another hour or two.

Wahlberg was introduced to intermittent fasting by his friend and media agency chief executive Ari Emanuel.

Followers of the method say it reduces inflammation, lowers the risk of conditions like arthritis and may even be able to boost muscle growth by affecting hormones.

But they also warn over unpleasant side-effects including hunger pangs, which take about a month to ease asthe body adjusts to the change.

His carbohydrate sources are normally rice, potatoes and oats.

The diet plan and volume of food consumed varies depending on whether he is trying to change his body for a new cinema role.

For his role in Pain and Gain in 2013, Wahlberg binged on ten meals a day to put on 47lbs.

But for his 2016 role in Deepwater Horizon where he needed to be heavy and out of shape, he switched to gorging on fried foods, wine and beer.

The actor turned businessman added that his bedtime is set for 7.30pm.

Asked about the early mornings, he said: ‘In the morning getting up early, there’s no one around.

‘I’m going through all my emails reaching out to everybody I work with in various respects.

‘I can make a lot of those calls in the morning, if I’m going back and forth to the golf course or when I’m in the car.’

He said he follows the intermittent fasting about five days a week at least.

To unwind the actor says he likes to go swimming in a nearby lake. He also sees a physiotherapist to help with back issues.

Tags: 6.1 exercise class 9, exercise 3.7, exercise 4.4, exercise may reduce the risk of cancer by, i exercised after microblading